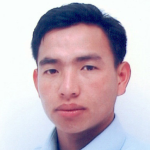 (Note: dear readers this an artcle has been found in Facebook group. It might be useful but not a view of kirat.org.np).

Although there is no evidence of lower or middle Paleolithic settlements in Tripura, Upper Paleolithic tools made of fossil wood have been found in the Haora and Khowai valleys. The Indian epic, the Mahabharata; ancient religious texts, the Puranas; and the Edicts of Ashoka – stone pillar inscriptions of the emperor Ashoka dating from the third century BCE – all mention Tripura. An ancient name of Tripura is Kirat Desh (English: “The land of Kirat”), probably referring to the Kirata Kingdoms or the more generic term Kirata. However, it is unclear whether the extent of modern Tripura is coterminous with Kirat Desh. The region was under the rule of the Twipra Kingdom for centuries, although when this dates from is not documented. The Rajmala, a chronicle of Tripuri kings which was first written in the 15th century, provides a list of 179 kings, from antiquity up to Krishna Kishore Manikya (1830–1850), but the reliability of the Rajmala has been doubted. The boundaries of the kingdom changed over the centuries. At various times, the borders reached south to the jungles of the Sundarbans on the Bay of Bengal; east to Burma; and north to the boundary of the Kamarupa kingdom in Assam. There were several Muslim invasions of the region from the 13th century onward, which culminated in Mughal dominance of the plains of the kingdom in 1733, although their rule never extended to the hill regions. The Mughals had influence over the appointment of the Tripuri kings. More details about Tripura click on the link http://www.tripura.org.in/himalayankirat.htm http://www.tripura.org.in/origin.htm

Twipra Kingdom (Sanskrit: Tripura, Anglicized: Tippera) was one of the largest historical kingdoms of the Twipra people in the North-east India.

The Twipra Kingdom was established around the confluence of the Brahmaputra river (Twima with the Meghna and Surmarivers in today’s Central Bangladesh area. The capital was called Khorongma (Kholongma) and was along the Meghna river in the SylhetDivision of present-day Bangladesh.

The present political areas which were part of the Tipra Kingdom are:

Sylhet, Dhaka and Chittagong Divisions of Bangladesh
Cachar Valley of Assam
Mizoram and Tripura states of India
The Tipra Kingdom in all its various ages comprised the areas with the borders:

Khasi Hills in the North
Manipur Hills in the North-East
Arakan Hills of Burma in the East
The Bay of Bengal to the South
The Brahmaputra river to the West.
A list of legendary Tripuri kings is given in the Rajmala chronicle,a 15th-century chronicle in Bengali verse written by the court pandits of Dharma Manikya (r. 1431). The chronicle traces the king’s ancestry to the mythological Lunar Dynasty. In the 8th century, the Kingdom shifted its capital eastwards along the Surma river in Sylhet near present Kailasahartown of North Tripura.

The religion of the Tipra had 14 deities known as “Chibrwi Mwtai” (in Kokborok language) and is still preserved in the Chibrwi Mwtai nok in Old Agartala, which is maintained by the Tipra priests known as Chontai/Ochai’s, who oversee the festivals of the Kharchi and Ker according to traditions. It was similar to the Chinese folk religions.

The earliest historical records concerning the Twipra kingdom concern the 13th century, when it first came under pressure from the Islamic conquests in India. This is also the time of origin of the Manikya Dynasty, started when Ratna Fa adopted the title Manikya, which was held by all Kings of Tripura until the death of Bir Bikram Kishore Manikya in 1947. Ratna Fa shifted the capital to Rangamati on the banks of the river Gumti, now in South Tripura.

Tripura was one of the states that pushed back successive waves of invasions from Turks, Ethipian Muslims, Afghans, and Mughals. On many occasions, Tripurans also pushed back Burmese and Arakanese invasions from the East. The Hill territories of Tripura, comprising present day Tripura state, Sylhet hills of Assam state, Cachar hills of Assam state, Mizoram state, and Chittagong Hill Tracts, remained free and independent before the British takeover. The plains of Tripura, however, fell to the attacks from Mughals. The plains territories comprise today’s South East Dhaka and Comilla areas. While the plains areas were thus Islamized, the Hills of Tripura served as a continuous bulwark against penetration to the East. The Tripura Hill Kings were major sponsors of Hindu traditions and customs. In the modern age they are remembered as one of the longest and most stable dynasties from the Indian East.

Dhanya Manikya (r. 1463 to 1515) expanded Twipra’s territorial domain well into Eastern Bengal. Rangamati was renamed Udaipur after Udai Manikya. The kingdom flourished in the 16th and 17th centuries, Kings such as Govinda Manikya putting up a defense against the pressure of the Muslim kingdoms to the west, until the final conquest of the plains areas by a renegade Tripuri prince backed by Mughal governors of Eastern Bengal plains. After this, plains Twipra was a Mughal client kingdom, with the Mughal rulers taking influence on the appointment of its kings.However the Mughals could never penetrate the Hill territories to the East.The plains,on the other hand were Islamized through conversion of the Bengali people living there.

In British India, the kings retained an estate in British India, known as Tippera district or Chakla Roshnabad (now the greater Comilla region of Bangladesh), in addition to the independent area known as Hill Tippera, the present-day state of Tripura. Bir Chandra Manikya (1862–1896) modelled his administration on the pattern of British India, and enacted reforms including the formation of Agartala Municipal Corporation. The last king was Kirit Bikram Kishore, son of Bir Bikram Kishore Debbarma, who ruled for two years, 1947-1949. In 1949, Tripura became part of the Republic of India. The Tripuri “heir apparent” is Kirit Pradyot Deb Barma (born 1978), the son of the last king, who is sometimes given the courtesy title of “Maharaja”.

‘Hill Tipperah’ in the Bengal Gazetteer, 1907
Tripura became a princely state during British rule in India. The kings had an estate in British India, known as Tippera district or ChaklaRoshnabad (now the Comilla district of Bangladesh), in addition to the independent area known as Hill Tippera, the present-day state. Udaipur, in the south of Tripura, was the capital of the kingdom, until the king Krishna Manikya moved the capital to Old Agartala in the 18th century. It was moved to the new city of Agartala in the 19th century. Bir Chandra Manikya (1862–1896) modelled his administration on the pattern of British India, and enacted reforms including the formation of Agartala Municipal Corporation.

Following the independence of India in 1947, Tippera district – the estate in the plains of British India – became a part of East Pakistan, and Hill Tippera remained under a regency council until 1949. The Maharani Regent of Tripura signed the Tripura Merger Agreement on 9 September 1949, as a result of which Tripura became a Part C state of India. It became a Union Territory, without a legislature, in November 1956 and an elected ministry was installed in July 1963. The geographic partition that coincided with the independence of India resulted in major economic and infrastructural setbacks for the state, as road transport between the state and the major cities of India had to follow a more circuitous route. The road distance between Kolkata and Agartala before the partition was less than 350 km (220 mi), and increased to 1,700 km (1,100 mi), as the route now avoided East Pakistan. The geo-political isolation was aggravated by an absence of rail transport. Some parts of the state were shelled by the Pakistan Army during the Indo-Pakistani War of 1971. Following the war, the Indian government reorganised the North East region to ensure effective control of the international borders – three new states came into existence on 21 January 1972: Meghalaya, Manipur, and Tripura. Since the partition of India, many Hindu Bengalis have migrated to Tripura as refugees from East Pakistan; settlement by Hindu Bengalis increased at the time of the Bangladesh Liberation War of 1971. Hindu Bengalis migrated to Tripura after 1949 to escape religious persecution in Muslim majority East Pakistan. Before independence, most of the population was indigenous;. Ethnic strife between the Tripuri tribe and the predominantly immigrant Bengali community led to scattered violence, and an insurgencyspanning decades. This gradually abated following the establishment of a tribal autonomous district council and the use of strategic counter-insurgency operations. Tripura remains peaceful, as of 2016

Tagore with Maharaja Radha Kishore in 1900
Tripura State, also known as Hill Tipperah, was a princely state in India during the period of the British Raj and for some two years after the departure of the British. Its rulers belonged to the Manikya dynasty and until August 1947 the state was in a subsidiary alliance, from which it was released by the Indian Independence Act 1947. The state acceded to the newly-independent Indian Union on 13 August 1947, and subsequently merged into the Indian Union in October 1949.

The predecessor state of Tripura was founded about 100 AD. According to legend the Manikya dynasty derived its name from a jewel (‘Mani’ in Sanskrit) that had been obtained from a frog. The first king who ruled the state under the royal title of Manikya was Maharaja Maha Manikya who ascended the throne in 1400. The Rajmala, a chronicle of the Kings of Tripura, was written in Bengaliverse in the 15th century under Dharma Manikya I. The kingdom of Tripura reached its maximum expansion in the 16th century.

In 1764, when the British East India Company took control of Bengal, the parts of Bengal that had been under the Mughal Empirewere taken over by the British administration. In 1809 Tripura became a British protectorate and in 1838 the Rajas of Tripura were recognised by the British as sovereigns. Between 1826 and 1862 the eastern part was subject to the ravages caused by Kukiinvaders that plundered and destroyed villages and massacred their inhabitants.

There were troubles in every succession among the Tripura royal family members when the aspiring princes often resorted to use the services of the Kukis to cause disturbances. Thus in 1904 the British enacted a sanad that regulated permanently the succession of the royal family. Thenceforward the succession would have to be recognised by the Viceroy of India representing the British Crown.

Bir Chandra Manikya (1862–1896) modelled his administration on the pattern of British India, and enacted reforms including the foundation of the Agartala Municipal Corporation. In 1905 Tripura became part of the new province of Eastern Bengal and Assamand was designated as ‘Hill Tippera’. In addition to the Hill Tippera area, which corresponds to Tripura State, the kings retained a fertile estate known as Chakla Roshnabad with an area of 1476 km², located in the flatland of Noakhali, Sylhet and Tipperahdistricts; the latter is now mostly included in the Comilla District of Bangladesh.

King Bir Bikram Kishore Debbarma died in May 1947, shortly before the Indian Independence. His son Kirit Bikram Kishore was a minor at that time, and, so, the Maharani Kanchan Prava Devi presided over the Council of Regency formed to govern the state. On 13 August 1947, the Maharani signed the Instrument of Accession, joining the Indian Union. There was turmoil in the state in the succeeding months and several changes in the administrative structure took place in quick succession. Finally, on 9 September 1949, the Maharani signed the Merger Agreement with Indian Union, which became effective on 15 October, and Tripura became a Centrally administered Part C State (Chief Commissioner’s Province) of India.

Rulers
The head of the royal family of Tripura held the title of ‘Maharaja’ from 1919 onwards. Since 1897 the rulers were entitled to a 13 gun salute by the British authorities 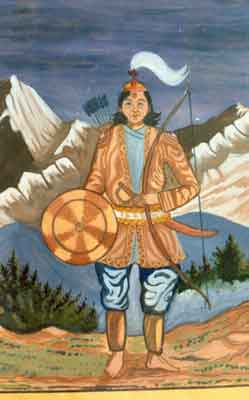 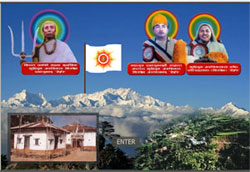